Warning: Parameter 2 to wp_hide_post_Public::query_posts_join() expected to be a reference, value given in /home/customer/www/daislikethese.com/public_html/wp-includes/class-wp-hook.php on line 308
 Bruges at Christmas with Kids - Dais Like These 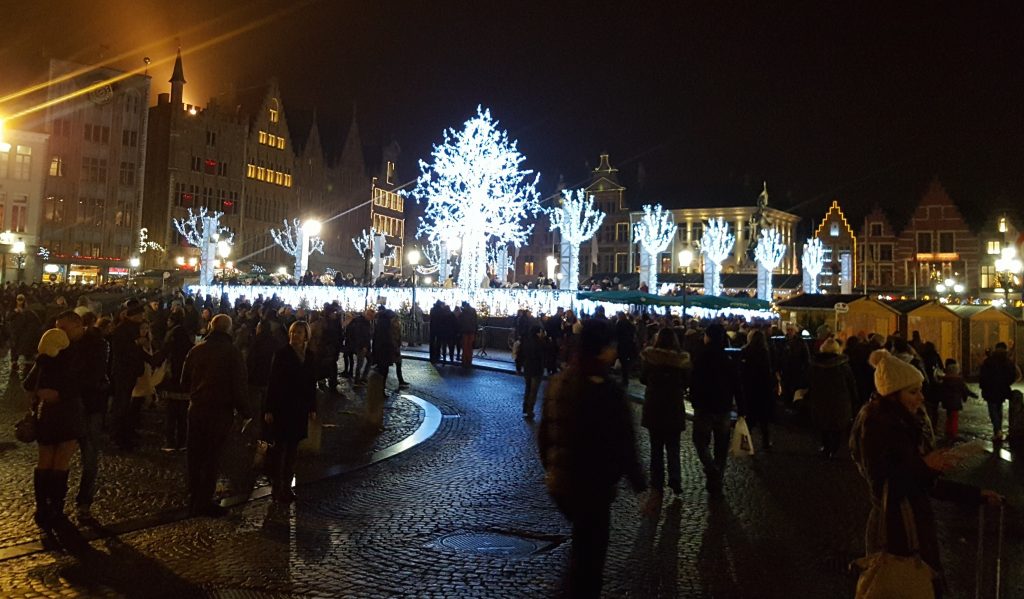 With the promise of pretty buildings, picturesque waterways, beer, chocolate and plenty of Christmas cheer, I was super excited at the prospect of heading for a weekend in Bruges.

The booking was all very last minute, which despite adding to the excitement, caused a few problems with finding accommodation – it would seem we were not the only ones in search of a magical Christmas weekend! It turns out you need to book accommodation far in advance. After a sea of grey dots on TripAdvisor, we finally found an apartment within a B&B not too far out of the centre. We were good to go!

We live an easy hour or so drive from the Euro Tunnel terminal and so after getting up super early, we zipped straight there and boarded our train. It was still dark when we arrived in Calais, and started the very straightforward drive to Bruges. I didn’t realise just how easy the journey would be so I was surprised to see that we had arrived at our B&B before 10am!

We were able to check in early, but we just grabbed our room key and started what turned out to be a bit of a farcical journey into central Bruges. There was a bus stop opposite the B&B, which from our research would take us towards the centre very easily. We headed straight there, only to find out that the buses were only every hour and we had just missed one. We decided to walk and keep an eye out for a taxi, which of course we never found!  After a mile or so of walking we ended up just waiting for the bus which, as we expected, took us very quickly towards town, and we jumped off near one of the gateposts to the old town. The bus journey turned out to be free (a seasonal promotion) and if we had organised ourselves a bit better, it could have been the simplest journey.

I am not sure if it was this difficult and lengthy journey into town that set the kids into meltdown mode, or if they were just under the weather/tired/bored/all of the above, but from this point on their behaviour was difficult to say the least! We had one boy being super cheeky, one being overly sensitive, and their little sister screeching and grumping at every opportunity. I have to say, they proved to be very difficult sightseeing companions and even worse dining companions!! But, we had come all this way so we tried (and I often failed) to plaster a smile on and try to make the most out of the day.

The first thing that struck me about Bruges was just how christmassy it was. It honestly felt like a fairy tale town, with decorations reminiscent of Disneyland. Almost every shop is adorned with the most beautiful decorations and the smell of gluhwein hangs in the air. All it needed was a dusting of snow and I truly would have thought I was walking on the set of a Christmas movie! Between the bickering, I did see glimmers of awe in the kids faces, and Baby DaisLikeThese stopped screeching every now and again to point at pretty lights and say “wow!” in her cutest voice. So I hope it wasn’t completely lost on them.

#bruges at Christmas is a bit like Disneyland, with nearly every shop adorned with the most amazing decorations. This particular shop had little musical Christmas drumming toys in the doorway decoration so it was not only pretty, but also fun🎄 – – #familytravel #travelwithkids #travel #brugge

Checking out the famous chocolate shops was definitely on my wish list, well Belgian chocolate is renowned after all! You certainly won’t struggle to find them, they are everywhere. Some are obviously on the tour guide itinerary and are so packed full of tourists that you can’t even get through the door, but it is easy to find another. The window displays are amazing, ranging from traditional: In an attempt to cheer the kids up we bought them some chocolate from a beautiful shop with a vast selection of goodies. One of them may have grumpily declared that it was “too rich” but I certainly enjoyed it!! We’d come into this weekend with very lose ideas about what we wanted to do, which is sometimes a lovely approach. But the one thing we were certain we wanted to do was head to the famous Belfort tower and climb up it if the queues were not too bad.

Thankfully we were in luck and after waiting for about 10minutes, we were ready to start our climb. My lack of planning caught up with me at this point and I didn’t quite realise just how hard the climb up would be. Not only were the stairs very narrow, uneven and slippery, but the kids decided to throw some challenging behaviour into the mix too; Baby DaisLikeThese obviously needed to be carried up the stairs but she fiercely wanted to climb all by herself, and our 5 year old decided half way up that he had a very intense fear of heights and small spaces and needed verbal coaching to climb up and back down!

Despite these challenges, we made it all the way up! We were even rewarded with the quarter hour chimes of the bells, literally just above our heads! The view from the top was slightly reminicent of our view from the top of the Eiffel Tower a few Christmases previously, which was a shame. What chocolate is for me, beer is for Mr DaisLikeThese and Bruges certainly doesn’t disappoint in that department!

We booked to have lunch at The Half Moon Brewery, which is a functioning brewery which also has a bar and restaurant on site. We had sensibly decided to wait until the day to see how the kids were feeling before booking a brewery tour and we decided against it considering the moods they were in!

Despite not being able to enjoy a tour, Mr DaisLikeThese enjoyed pairing a few different beers with his meal and I even ditched my normal glass of wine and joined him! Later that day we ended up in another brewery completely by chance. Whilst strolling around town, in need of a break from walking, we could see a small bar terrace overlooking the canal with heaters and pretty lights. We decided to cross at the nearest bridge and hunt it out. We discovered that it was another working brewery with bar, the Bourgogne des Flandres, and whilst the kids filled up on juice and played on their Kindles, we sampled a few more beers. I opted for a lovely raspberry beer and Mr DaisLikeThese had the house beer which he loved so much we left there laden down with some bottles to enjoy at home.

I’m not sure what I was expecting from the Christmas Market in Bruges, but what ever it was, unfortunately I was not massively impressed.

The market, although spread across two sites, was actually a lot smaller than I was expecting. The main site was in front of the Belfort at Market Square. It did have beautifully pretty lights in the form of trees, which even sparkled brightly during the day, and the ice rink looked loads of fun (if not a bit melted!), but other than that it was very simple; with a few rows of wooden hut stalls mostly selling food and drink. At the smaller site on square Simon Stevinplein we found some fun fair rides, modern rather than traditional, again surrounded by wooden hut stalls. The kids loved the modern carousel, with Baby DaisLikeThese having her first ever turn on one. I was definitely more taken with Bruges as a whole with its wonderful architecture, decorations, and general Christmas atmosphere than I was by simply the Christmas market.

On our second and final day in Bruges, we decided to give the kids some time to let off some steam before making them do one final short sightseeing walk. So we headed to the windmills that sit just to the east of the city centre.

We found three traditional windmils in a small area of park, each perched on top of quite a steep mound.  It was such a beautiful morning, with perfectly clear blue skies. The boys were desperate to get started and ran up the hill to the first one whilst we were still getting Baby DaisLikeThese out of the car!

We all loved walking up and down the the windmills in the small park, it was certainly a world away from the busy streets of Bruges and the boys seemed to be grateful of the change of scenery and opportunity to run free.

Perfectly situated across the road from the windmills is a small cafe/pub, aptly named De Windmolen. We grabbed a seat outside and had a coffee whilst the boys continued running. Although it was a beautifully sunny day, it was still very cold. We both agreed that Bruges would be amazing during the summer, and the local man sitting next to us told us it  gets busier with tourists then too! A Visit to De Haan

Although not in Bruges, this seaside town is only around half an hour away and was definitely worth the visit. Whether you are in Bruges with kids or not, it is a great place to escape the busyness of the city – which we felt the kids definitely needed!

With a vast sandy beach, shops, restaurants, and one of the best kids playgrounds, we certainly enjoyed it.

Despite the kids not being on top form (at all!!) all weekend, I still fell in love with Bruges. With beautiful and surprising architecture at every step, and an abundance of good food, beer, and chocolate, what’s not to love?!

Despite being a strong believer in family travel, I have to admit that I am already planning a trip back with out the kids! Warning: Parameter 2 to wp_hide_post_Public::query_posts_join() expected to be a reference, value given in /home/customer/www/daislikethese.com/public_html/wp-includes/class-wp-hook.php on line 308