Warning: Parameter 2 to wp_hide_post_Public::query_posts_join() expected to be a reference, value given in /home/customer/www/daislikethese.com/public_html/wp-includes/class-wp-hook.php on line 308
 A Flying Visit to Milan with Kids - Dais Like These 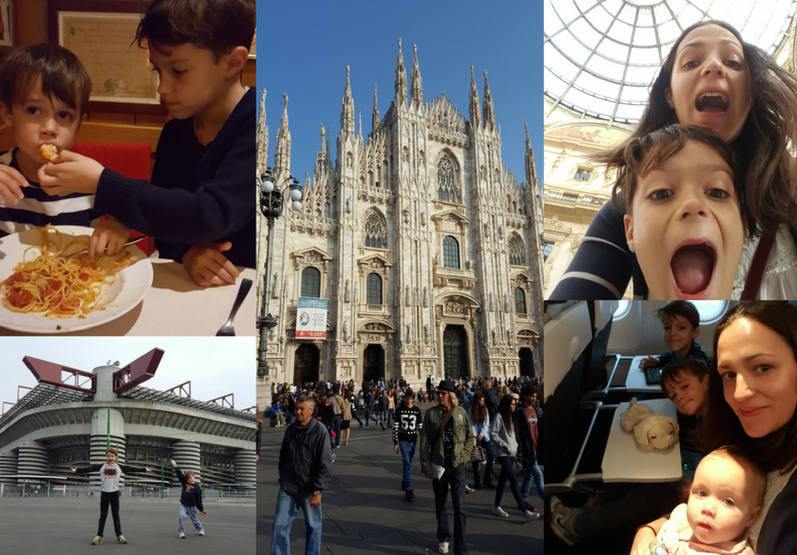 This weekend saw us taking a flying visit to Milan with kids, and what a lovely weekend we had.

Mr DaisLikeThese was attending a conference out there and so the kids and I joined him. It meant that I had to travel alone with the children but it was definitely worth it!

We stayed in a stunning Air BnB loft apartment which as well as being in a  great location, had the perfect balance of modern luxury and being amazingly family friendly. With a kids bedroom, a travel cot and bedding, highchairs and lots of kids plastic crockery and cutlery, it was ideal for us. But the open plan loft design, with luxury bathrooms and kitchen meant it felt like a hotel penthouse at more than half the price! It was on the fourth floor of an old Milanese building, with a grand and beautiful art deco stairway (but thankfully had an elevator!). We were all so happy there. As we were only there for two full days we decided that our priorities were: targeted sightseeing to keep us adults happy, a visit to the city’s football stadium to keep the boys happy, and copious amounts of pizza and pasta to keep us all happy!

Visiting the Piazza Del Duomo was top of our sightseeing list as we could tick off the Duomo itself as well as the  Galleria Vittorio Emanuele II. We were blown away by the size and beauty of the Duomo Cathedral. After snaking through backstreets on our search for the cathedral, when we finally emerged onto the Piazza, it took our breath away. The weather was beautiful so we grabbed an ice-cream for the kids and wondered around taking in the view. We had planned to climb the stairs to the walkways at the top of the cathedral but when we saw the size of the queues, we quickly vetoed it. We instead headed into the Galleria Vittorio Emanuele II, which is one of the world’s oldest shopping mall’s. The ornate buildings, topped with a vast domed glass ceiling were simply stunning.

We headed back via Via della Spiga, which is a pretty pedestrianised street home to some of the super high end fashion stores such as Prada, Hermes, and Roberto Cavalli. But for me it was Dolce & Gabbana that stole the show along this street. Not only did they seem to have occupied the majority of shop units along the street, they filled their windows with some wacky and fun displays which we all enjoyed having a look at. This is a window shoppers paradise.

A tour of the San Siro Football Stadium

Our trip to do a tour of Milan’s football stadium, the San Siro, filled the boys with such excitement! We navigated Milan’s metro system out to the stadium (we bought a day pass for 4.5oeuro but you can also get a 90minute pass for 1.50euro) where we walked straight up to the gates with no queueing. Unfortunately the museum part of the tour was not operating, so it was straight into the stadium – I’m not sure the boys minded that too much!!

I wasn’t aware that the stadium is home to both of Milan’s football teams; AC Milan and Inter Milan, so I learnt something new straight away.  We visited both dressing rooms (AC Milan’s was definitely the better of the two in my eyes!), headed down the tunnel to the pitch, sat pitch side in the managers seats and then up into the stands to get a fan’s eye view.

If you can’t get to a game at the stadium, then doing a tour is a great alternative and will keep any football crazy boys happy.

We ate out at every meal, but for me two restaurants stood out. Close to our apartment was an old school Italian restaurant, La Porta Rossa, with walls covered in ornaments and pictures of the owners greeting guests (I assume famous guests – the only one we recognised was Bruce Willis!) from the 1970’s onwards. The boys were super adventurous and had spaghetti with prawns which they wolfed down – it was impressive! The staff was friendly and helpful, proved by the fact that when we asked if there was a shop near by to buy milk for Baby DaisLikeThese they gave us a carton of milk from the kitchen to take home and refused to take any money for it! Our favourite meal was at Ristorante Pepe e Sale which we stumbled across after taking the wrong Metro and deciding to walk for a bit as the next one was a 10minute wait. And I am so glad we did! It is in a very residential area, which on a Sunday was very quiet, definitely off of the tourist beaten track. But despite that it was busy and buzzing inside, full of local families enjoying their Sunday meal. The boys shared the cheesiest, stringiest Margherita pizza, Mr DaisLikeThese had a Milenese breaded veal dish with a beautiful fresh tomato salad, and I pushed the boat out and had spaghetti with truffle shavings which was just divine! Washed down with a glass of red, surrounded by happy Italian families, it was just a perfect lunch. I would definitely return.

On our final evening we walked to the Corso Como area, which is a pedestrianised street lined with bars, restaurants and shops. We were in search of a rooftop bar that we had read about but unfortunately it wasn’t open. We instead had a lovely stroll along this lively street where we discovered 10 Corso Como, which is a stunning courtyard behind the buildings of the street which is home to a cafe, a bar and art galleries. We walked back through the modern sky-scraper development of Piazza Gae Aulenti, which despite not being traditional Milan, gave the boys a great space to run around in!

All in all, our flying visit to Milan with kids was a great success. At only 1.5hrs from Heathrow and then a very quick and cheap taxi ride into town, it was a very simple getaway for us. I’d love to return, maybe with some girlfriends to enjoy the stylish bars and window shopping!