Warning: Parameter 2 to wp_hide_post_Public::query_posts_join() expected to be a reference, value given in /home/customer/www/daislikethese.com/public_html/wp-includes/class-wp-hook.php on line 308
 Spring Week at Wyevale Garden Centres - Dais Like These 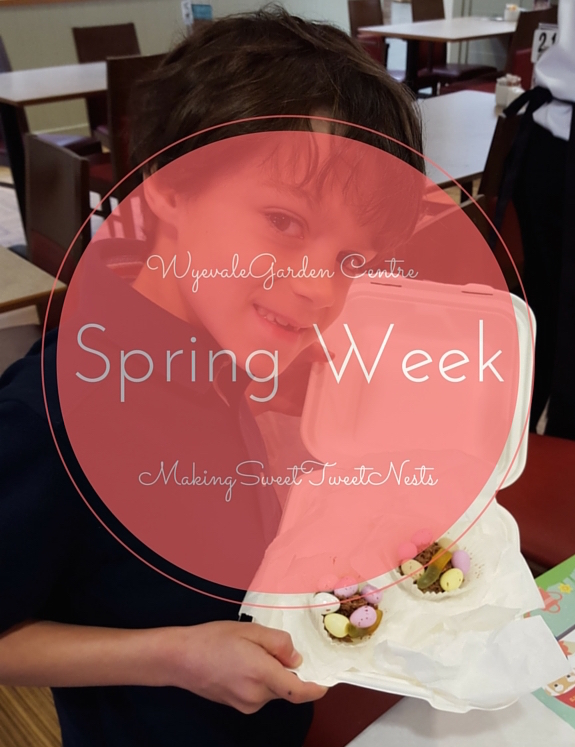 Since moving house just over a year ago, our local Wyevale Garden Centre has become our go to place for seasonal kids activities; pumpkin picking at Halloween and visiting Father Christmas during the festive season being our favourites so far. The boys love it there, so when we were given the opportunity to go along to Spring Week they were both game.

So one wet and miserable Wednesday morning we headed off to the garden centre, grateful not to be cooped up at home.

When we arrived, the boys were shown over to the activity table. It turned out that they were the only ones booked in that day so they had the full attention of the lady running the session, Karolina. The table was set out nicely with everything they would need, along with activity sheets and a big jug of squash which was included in the price.

They would be making chocolate nests with jelly worms and mini eggs along with decorating a box for them to go in. Karolina took them off to wash their hands and then they got stuck in.

Despite making a lot of easter based recipes and crafts already over the previous few weeks, the boys seemed to enjoy themselves. Both were very happy when the big bowl of melted chocolate was bought over!

They made their nests pretty quickly, chatting away to each other and to Karolina as they worked. The nests were taken off to the fridge to set and they got to work on their boxes. They were given some pens, crayons, glue and shredded paper along with a book with photos of birds that they could use to get some ideas.

When they were all done, their nests were returned from the fridge and they popped them in the boxes.

It wasn’t long before they were tucking into their creations before heading to burn off some energy in the soft play area!

The boys both had fun, it was something nice to do on a rainy morning and I think they enjoyed it all the more after being cooped up at home with various bugs over the previous few weeks. Also, which kid is not going to enjoy a chocolate based activity?!

For me, I felt it was a shame that they were the only ones booked in for the activity that day. It would have been great for them to socialise with other kids after spending so much time with each other so far over the holidays. The activity was also over fairly quickly, which was also probably down to the fact that there were no others in the group.

But despite this, it was still a nice thing to do and it was lovely to see the boys having fun after a few poorly weeks.

Disclaimer: we were given tickets to the activity free of charge in return for an honest account. All views are my own.