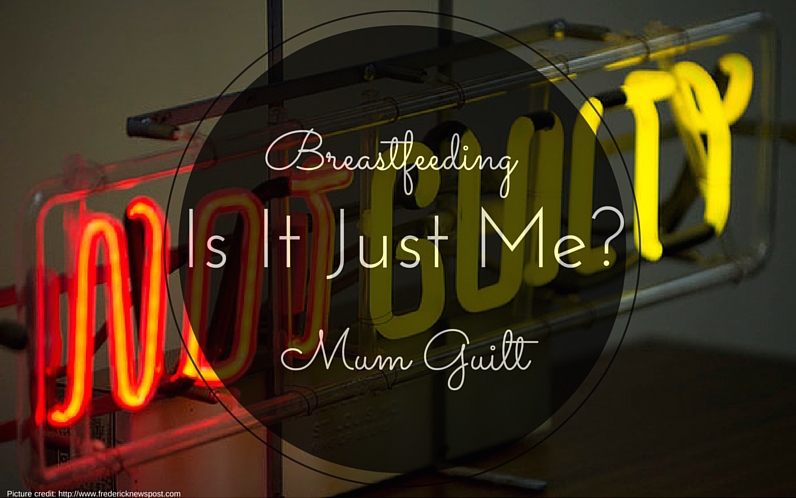 Is it just me or is breastfeeding a major mum guilt trigger?!

Well, a simple Google search tells me I’m certainly not alone. The internet is awash with chatroom conversations on parenting websites, blogs, and articles on the guilt associated with breastfeeding.

I am a chronic sufferer of mum guilt and have been since the day my eldest child was born nearly eight years ago. Some of my biggest self inflicted guilt trips have been about breastfeeding, and I have realised recently that whatever path my breastfeeding journeys  would take, good or bad, I will always find something to feel guilty about.

I have breastfed all three of my babies for the first five months or so of their little lives. With my first two children, that was five months of some of the most difficult, uncomfortable, painful, crazy and sometimes even humiliating days of breastfeeding.

My experiences with them both were very similar; we had the extremely difficult first few weeks where basically cabbage leaves and Lansinoh were my saviours, the euphoric couple of weeks when you realise “oh my god, we can actually do this!”, followed by the remaining weeks of feeding routines, leaking breasts (generally in the most public of places), stress about upsetting the old man in the cafe (not sure why because I am generally quite outspoken), worrying whether they were feeding enough (could my boobs seriously produce the equivalent of a 5 or 60z feed every few hours?!), blaming any night wakings on the fact that they were breast fed, and basically not enjoying it very much.

That sounds awful doesn’t it? But don’t get me wrong, we did have good days. I loved the fact that I could breastfeed and that I was doing the best for my baby, I adored the closeness, and I loved that I didn’t have to sterilise bottles or worry if we had enough formula. But just simply didn’t enjoy breastfeeding. I was desperate to finish and move on to formula feeding.

But despite knowing that I had done so well lasting five months, I still beat myself up about it. I still felt terrible for not wanting to carry on and sometimes I still feel guilty about it to this day.

Now, my experience with my third baby, more recently, was a different story. Yes we had the really tricky first few weeks (she just wouldn’t latch properly, dropped 11% of her birth weight quite quickly, and the visiting midwives were threatening that she would be admitted to hospital which I desperately didn’t want considering I’d had a perfect home birth!), but when we finally got the hang of it I loved it! It felt so natural and comfortable. She was a great feeder, super efficient (maybe she realised that with two big brothers who needed to get to school and a dog that needed walking, there was no time to hang around). I felt like (and actually announced to anyone who would listen!) that I would carry on as long as possible and would never have to bottle feed, it was great!

But as the weeks went on, her weight started dropping again. She would scream after feeds, clearly still hungry. Over the Christmas break (when she was around 4 months old) I had lots of support from family with my older children, so I started feeding her every two hours or so to try to satisfy her hunger, and build my milk supply. It was exhausting! When I went to get her weighed as soon as the clinic opened after Christmas I was expecting her to have joined me in the inevitable Christmas weight gain but she had barely maintained her weight.

I made the decision to give her a bottle of formula milk, just once a day. But now, in my warped world of chronic mum guilt, I wasn’t feeling guilty for giving her a bottle, in fact it was the opposite!

She completely drained the bottle and seemed to thoroughly enjoy it. I carried on mixed feeding for a few weeks, but it became clear that she was not interested in me any more (classic tale of the bottle being faster and easier, I know) . When I tried to offer her by boob she would look at me incredulously, clearly wondering “what is this you’re trying to give me?!” I was so desperate to carry on, but my offerings were no longer cutting it. I could see that my milk was not satisfying her, yet I wanted to persist.

Is there no end to the guilt we feel as mums?!

It has taken a lot of reflection but I have come to terms with the fact that actually I did a great thing for my babies, five months is better than none. For all three of them I did what was best for both them and me at the time, and actually it is important to consider the well being of mums too.  Even without a single day of breastfeeding there are a million ways a mum can make sure her baby is happy and healthy.

Props to all the breast and bottle feeding mums out there, there should be no room for mum guilt.

Now I just need to work on the million and one other things that I worry about!