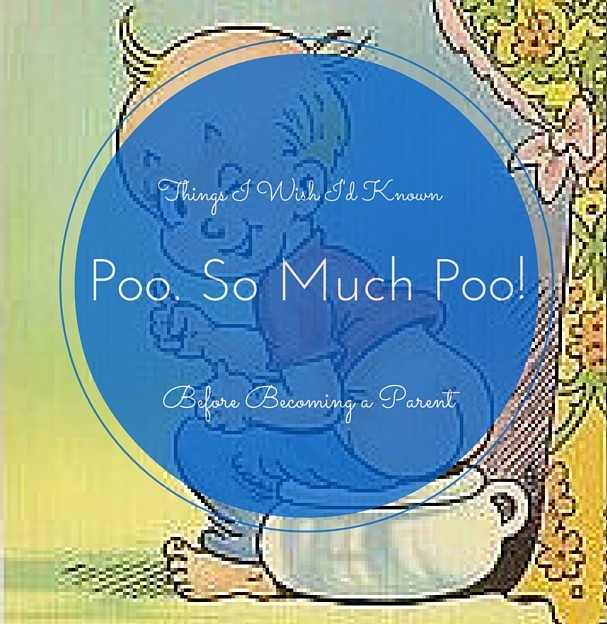 It started with an antibiotics induced explosion of diarrhoea which literally hit the wall on the other side of the hospital room as I lifted my first newborn son’s legs up to do a nappy change. I was 23 years old and had barely even held a baby before let alone cleaned baby shit off a wall! Little did I know that this would be the start of a slippery slope of ridiculous poo related incidents.

Don’t get me wrong, I knew there would be nappies upon nappies to change. But how hard could that be? And surely after a few years they’d be potty trained and that would be that. No, just no!

Did I realise that my children would treat me to impromptu, very public, al fresco poos? No. Did I ever dream that I would have to physically help my constipsted child ‘go’? No. Did I anticipate the shouts of “I’M FIIIIIINISHED!” Followed by the presentation of a pooey bum to wipe? Nope.

I remember the first time my son did the classic poo that goes all up the back of the baby grow and I took a picture and sent it to Mr DaisLikeThese, thinking it was some kind of freak event never to be seen again. Little did I know that this generally happens EVERY TIME!

I seemed to think that this and the hospital poo incident would pretty much cover any embarrassing poo scenario. How wrong I was! I now have a back catalogue of poo related stories that could challenge any parent at Child Poo Incident Top Trumps:

One sunny afternoon in a packed beer garden of one of those lovely pubs that have a kids playground, so you can have a guilt free glass of vino with lunch, I was greeted by the sounds of a worried announcement to the entire garden: “Excuse me, there’s a little boy here, eeeerm, doing a poo”
*please do not let that be my child*
Of course it was my child.
I had to very publicly clean up a steaming child turd from the middle of the beer garden, the eyes of all the other smug parents, with kids who don’t defecate in public, boring into me.
To be fair to my son, when I asked him why he did it he simply replied “because no one told me where the toilet was”.

Fast forward a few years, swap the pub garden for the lush manicured garden of a 5* hotel in Sicily and we go again. Luckily this time I noticed the squatting  figure of one of my kids in the bushes before anyone else did and sent poor Mr DaisLikeThese to go and sort it all out!

Note to self: whenever going anywhere with kids, always scout out the loo and tell them in as much detail as possible where it is!

Now, I’m not sure if it is a boy thing, but I generally get told in a lot of detail the specifics of each poo. I try to explain to them that actually I don’t need to know that this time it was “a daddy sized poo, and a mummy sized poo at the same time” or that they can see the remnants of last nights dinner in there, but for some reason they seem think I want to know!

Thankfully, now that the boys are a bit older, the incidents are becoming fewer and farther between. Now that baby DaisLikeThese has arrived, I genuinely thought there was no poo incident that would surprise me.

That was until the poo in the bath!!

I think we have been generally lucky to get through nearly 8 years of parenting and never had to deal with a bath poo. Never would I have imagined the snake like formation of a 3 day stored up breastfed baby poo released into water! You verge on being mesmerised by the slithering, perfectly formed snake making it’s way through the water, but then realise suddenly that you are holding your baby in a poo bath! Do you leave them there to finish their business or do you take them out and risk the poo snake decorating your bathroom?!! I’ve genuinely seen it all now.

I tend to think that Mr DaisLikeThese and I have pretty much become immune to any child poo related incident now. We can definitely look back and laugh!

If you think you can beat me at Child Poo Incident Top Trumps, tweet me @daisyhuntington or check out my Facebook page Facebook.com/daislikethese.