Warning: Parameter 2 to wp_hide_post_Public::query_posts_join() expected to be a reference, value given in /home/customer/www/daislikethese.com/public_html/wp-includes/class-wp-hook.php on line 307
 Sicily with Kids: Amazing Things To Do In and Around Taormina - Dais Like These 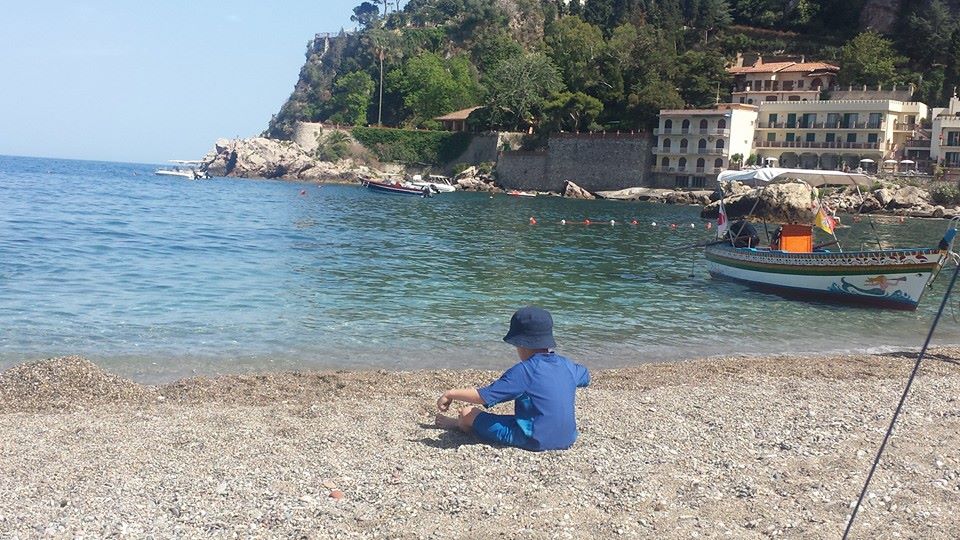 Writing a travel post over  two years after the last time you visited a particular country is not really the norm. But hear me out. I have visited Sicily twice, once as part of my honeymoon just over ten years ago, and then again as a family two years ago, with our kids in tow. BOTH times my camera and/or memory card has broken and I have lost all of my beautiful images, my pictorial evidence of the amazing memories we made.

After our most recent trip, my memory card died on me. I tried buying a new card reader, but it still read an error message, and I tried taking it to a photography shop but their computer came up with the same. So apart from obviously the fond memories in our heads, and a few mobile phone pictures, we had nothing to add to the photo albums. To say I was upset is an understatement!

So, last week when tidying up I found the memory card from my broken camera. I nearly threw it in the bin, but something stopped me. I took the card over to Boots and popped it in the photo printing machine and was amazed to see all my images flashing up on the screen – I nearly cried tears of happiness! My joy was short lived though, as nearly as soon as they had flashed up, they disappeared – an error message again.

Undeterred, I headed off to a different photography shop and explained the situation to them. After a two day wait I was presented with a USB stick with all of my wonderful images – I nearly hugged the guy in the shop!!

So, scrolling through all of my lovely pictures has prompted me to write this post about some of the amazing things to do in and around Taormina in Sicily with kids.

Take a Cable Car down to the beach

Taormina is built into the cliff side, and although this creates amazing views from the town both out to sea and over to the impressive Mount Etna in the distance, it is not very practical for visiting the beach. A walk down will take you a good hour with kids, and coming back up will be longer (and much harder!). Thankfully there is a cable car from the town down to the beach. So although you can’t just pop to the beach – it becomes an adventure and a novelty for the kids to ride there in a cable car!

You can buy a weekly ticket if you feel you’re going to make a few trips, or you can just pay as you go.

We always headed to the beach club of Lido La Pigna and paid to rent a couple of sun beds. This is great with the kids as you have a little base, the kids can escape the sun under the parasols, and you can even order snacks and drinks to your loungers. The lunch at the restaurant here was magnificent, both the food and the views from the terrace were amazing. Despite not having a dedicated kids menu, they were happy to split an adult pizza between the boys.

Taking an evening stroll, or la passeggiata, in many towns across Italy is somewhat of a ritual, and in Taormina there is no exception. The long and mostly pedestrainised Corso Umberto is the perfect setting for la passeggiata; with  shops, cafes, restaurants and ice cream parlous lining the street all along. The vibe in the evenings is fantastic, with happy children skipping along with their families, looking at shop displays, watching street entertainers, and indulging in ice creams nearly bigger than they are!

Our boys certainly enjoyed joining the locals and tourists for la passeggiata, and we tended to eat early and promise an ice cream for desert. I think when you are a child on hioliday, not much can beat staying up a little later than normal and eating amazing ice cream! This ancient theatre is probably one of the most famous sites in Taormina, and tourists flock here from far and wide. Built by the Greeks around the third century BC, and later developed by the Romans, it has arguably one of the most stunning backdrops you could imagine for a theatre.

The history and importance of the theatre may be lost on younger children, however they will love climbing up and down the tiered seating whilst the adults take it all in. My 8 year old is now studying the Romans at school and he remembers his visit here and has asked to go back – so it wasn’t lost on him!

As you can imagine the theatre gets very busy. Aim to get there early, or be prepared to queue! If you have adventurous children, or want to broaden their holiday horizons, visiting Etna is a must in my book. On our honeymoon ten years ago, Mr DaisLikeThese and I were lucky enough to take a night time visit and after an exciting off road journey up, watched the bright red lava explosions from the safety of a monitoring station. It is a memory that will stay with me forever – despite my camera breaking!

When we returned to Sicily with the boys, we knew we had to take them for their own visit. We had a fantastic view of Etna from the terrace of our apartment and their excitement at visiting built as each day (and evening watching the red glow from afar) passed.

The gorges of Alcantara are a natural beauty created by lava rock being split by the clear cool mountain waters. Because of their very hidden location, apparently they were not widely known about until the 50s. Now however a park has been created to give visitors access to this magnificent site.

You can park at the visitor centre and, after paying for admission, you take a lift down to the part of the gorges that open up. here you will find icy cold waters and a little beach area. Be warned that the current can be fast and there were little leaches stuck to our legs after our paddle in the water!

You can also climb up and follow trails along the gorges, stopping at various viewing points along the way.

Now this may not be ideal for the littlest of legs, but if you have kids who are happy to walk/climb, or if you have a back carrier (or strong shoulders like Mr DaisLikeThese!), then you will be rewarded with the most spectacular views of Taormina, Mount Etna and and the beautiful countryside and blue seas.

Have you ever visited Taormina with kids? I’d love to hear about your adventures.