Warning: Parameter 2 to wp_hide_post_Public::query_posts_join() expected to be a reference, value given in /home/customer/www/daislikethese.com/public_html/wp-includes/class-wp-hook.php on line 308
 Our Adventures in New York City - Part 4 - Dais Like These 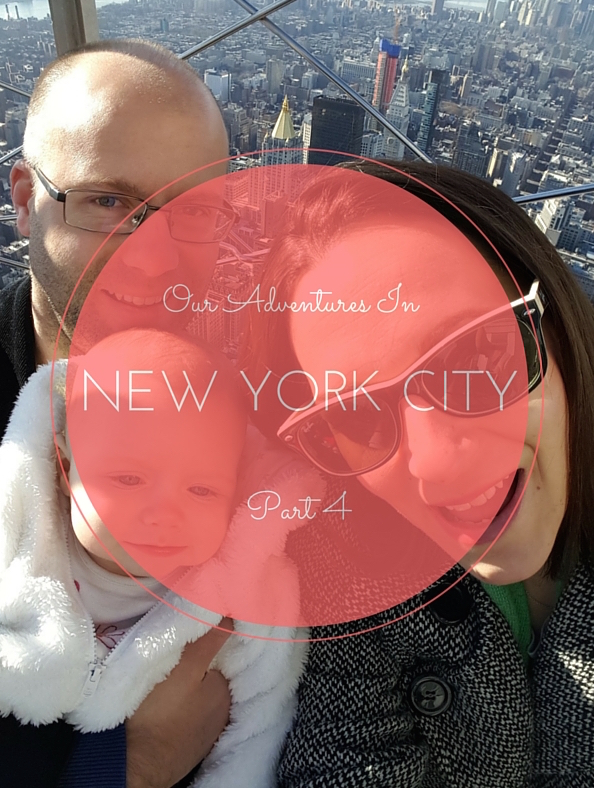 After a stress free trip with Baby DaisLikeThese, a fantastic few days of sight seeing, and even a night out, it was time for our final day in New York.

It was Saturday and we were finally getting to spend a day sightseeing with Mr DaisLikeThese.

Our plan was to get up and out early, checking out of the hotel on the way. What with having a slightly late night the night before, I was sceptical! But we managed it – that jet lag working in our favour still!

We decided to postpone breakfast and head straight for the Empire State Building for when it opened at 8am. And boy were we rewarded: We had to go through airport type security, which was a massive pain as they made us completely dismantle the buggy. Note to self: next time don’t hoard so much crap under the buggy!

But we then sailed through to the lift and went straight on up. I was totally blown away! We were seriously lucky with the weather, and we could see for miles. I think it goes without saying that visiting the Empire State Building is a must for anyone visiting New York.

After dragging ourselves away from the view, we headed off to find some much needed breakfast. I couldn’t leave New York without having one more sausage and egg roll and a coffee!

I really wanted to show Mr DaisLikeThese the High Line, as it wasn’t here the last time he visited, so we continued what would turn out to be a mammoth walk that day!

After walking the entire length and ending up in the Meatpacking District, we decided that as the weather was so amazing, we would just carry on walking all the way down to the 9/11 Memorial Site. Mr DaisLikeThese last visited New York in 2002 and the site was obviously very different back then, being so soon after the attacks.

On the way, we spent a good 15mins wondering around looking for the Firestation used in the Ghostbusters movie. It is on the corner of North Moore Street and Varick Street, but we managed to find it behind lots of scaffolding – it was under repair. It is actually a functioning firestation (for the Hook & Ladder 8 in New York City), but there is an homage painted on the floor outside! We then continued South and after a stop at the 9/11 memorial we met my uncle for a quick farewell drink in Battery Park. It was lovely to see him and for him to spend some time with Baby DaisLikeThese, considering she was only 3days old when he met her last, before moving over to New York!

After saying our goodbyes, the three of us started our walk North, slowly making our way back to our hotel.

We headed off to buy some presents for the boys in Canal Street, which is notorious for being able to haggle and pick a bargain. We did a great job of haggling and getting all of the presents on the boys wish lists (NY Fire Dept t-shirt, NY emergency services vehicles and a snow globe!) in just two shops. I would definitely recommend a visit if you want to bag a bargain, but it was so busy and a bit dicy so definitely keep your wits about you.

And on we walked, back through West Village where everyone seemed to be making the most of the beautiful weather – sitting outside the many cafes, bars and restaurants catching some rays. We managed to get a table outside in the sun at The Quarter on Hudson Street and had a fab brunch (despite the fact that it was the afternoon!). I had a lovely smoked salmon eggs benedict washed down with a peach ‘bubbly cocktail’ and Mr DaisLikeThese had the mexican chilaquiles and a very extravagant bloody mary

This is truly an amazing part of New York. A real residential neighbourhood feel, but only a stones throw from the high rise craziness of Manhattan. I was feeling super sad to be leaving. But, we called home to the UK to speak to the boys and I realised how excited I was to be seeing them soon – Baby DaisLikeThese was so happy to hear their voices on speaker phone too!! And so onwards, back towards our hotel to collect our stuff. We decided to use the subway and headed slightly North of our hotel to take in one last walk of Central Park before we needed to go. It was a beautiful Saturday afternoon and the park was busy with families and friends making the most of the weather.

We finally collected our stuff and headed off to the airport, full of mixed emotions; sad that I was leaving this amazing city with what seemed like so much unfinished business but also excited to see the boys in a matter of hours.

I’d managed to book onto the same flight as Mr DaisLikeThese for the return journey, so it was great knowing that I would have his help. However, he was booked in to Business through work and I was obviously booked in to Economy. We agreed that we would swap through the journey and take it in turns to enjoy the luxury.

Our flight back was with American Airlines and I have to say it was a world away from my flight with British Airways – and not in a good way!

When booking online there was no option to be able to select an infant friendly seat, as you can with BA. All that was available were middle seats, which worried me a lot. I called American Airlines and was told that I should arrive at the airport as soon as check in opened and they would be able to allocate me a suitable seat with a bassinet or infant seat. This was a total lie! When I arrived I was told there were no other seats available, I had to stay in the one already allocated.

Thankfully it turned out that no one was sitting in the aisle seat next to us (or they saw a baby and asked to sit somewhere else!) so I was able to sit there. Unfortunately the staff was generally very unhelpful. There was no overhead locker space left above me so they put my stuff a few rows forwards and when I asked for boiled water to make a bottle, they laughed! Apparently they don’t boil the water they make tea and coffee with?!

The man in the seat in front of us reclined it all the way immediately and it stayed like that for the entire duration of the flight. Joy.

Thankfully, my saving grace, Baby DaisLikeThese slept laying on me nearly the entire flight and, despite a little whinge when she was trying to settle herself, she did not cry once. She was truly amazing!

I did, however, have to stay put in my seat for the whole journey so that she didn’t wake up. I managed to sleep quite a lot myself which was fab (all that walking clearly took its toll) but it meant that I missed out on a few hours in business class.

We sneaked through to the priority security lane with Mr DaisLikeThese and his business class ticket and soon enough we were in our cab home. We met the boys and their grandma at the train station and it was such a joy and a pleasure to see them after what seemed like forever. Despite totally loving New York and having a few days of being a mum to one and not in charge of three and a dog, I seriously missed them and it was great to be back.

Next time, and I am sure there will be a next time, I want to take them with me and discover more of what New York has to offer for families.