Warning: Parameter 2 to wp_hide_post_Public::query_posts_join() expected to be a reference, value given in /home/customer/www/daislikethese.com/public_html/wp-includes/class-wp-hook.php on line 308
 Our Adventures in New York City - Part 3 - Dais Like These 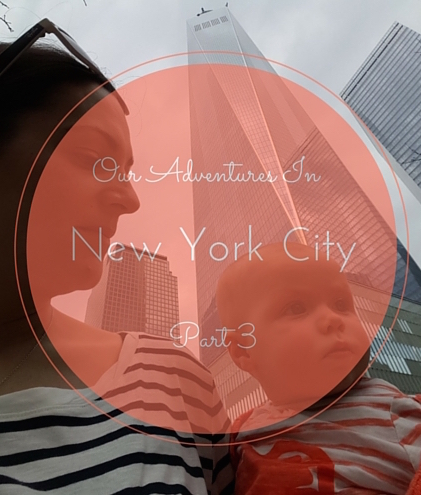 So we’d had a successful journey from London to New York, followed by a fab first day, and the following few days didn’t disappoint either.

We were up and out early again as Mr DaisLikeThese wanted to take a walk to check out the Husdon River edge before work. To be honest it was a long old walk and not very inspiring when we got there! However, we did find a great little cafe that did proper stodgy breakfast which was just what I needed ahead of another day of walking.

So today I decided to try out the bus. I wanted to go down to Battery Park in the very South of Manhattan but it was too far to walk (although I did walk nearly all the way back!) and the subway was probably going to be too much on my own with the buggy.

Thankfully the bus that I got on was super quiet. Normally you need to fold down your buggy as soon as you get on but I managed to get away with parking it next to me the whole way and no one said anything. Baby DaisLikeThese slept the whole way and despite a bit of traffic around Grand Central Station, we flew down to the City Hall bus stop which was the end of the line. We strolled down to Battery Park which is were you can catch a boat to see the Statue of Liberty up close and personal. When I saw the queue for the boat I decided to enlist the help of my trusty camera zoom and carry on my walk!

As I made my way to the 9/11 Memorial, I walked past The Sphere which was recovered from the Twin Towers site after the 9/11 attacks. It was amazing to think that it survived such devastation and it made me really start to feel quite emotional. But nothing could quite prepare me for just how emotional I would feel when I actually arrived at the 9/11 memorial site. I honestly didn’t realise just how much being there would affect me, I’m normally quite reserved about stuff like that! Firstly, I think being in that spot made me contemplate the scale of what happened, made me think about that day and about the people going who would have been going about their normal day just like people were now. Secondly, the fountains which each take the footprint of the towers were very thought provoking. The water rushing off into a central dark pit seemed very final, which I guess might be the point.

We continued our walk North, heading towards the High Line, stopping in a lovely little square in the TriBeca area to feed Baby DaisLikeThese her lunch on the way. As I mentioned before, we were so lucky with the weather that week which made stopping to feed like this just so much easier. Next we walked up through the West Village (which was so lovely that I made a note that I definitely wanted to come back) and headed to the Meatpacking District to pick up the start of the High Line, which is a public park built on a historic freight rail line elevated above the streets on Manhattan’s West Side.

Where we joined it, down in the Meatpacking District, there was a lift to take us up with the buggy. We had a lovely stroll along, and stopped at one of the many seating areas for Baby DaisLikeThese to have her bottle. There was loads to look at along the way, even a viewing spot with tiered seating over looking the busy 10th Avenue below. As well as tourists, there were loads of local workers on lunch breaks, and runners escaping the busy streets below. I seriously loved it!

I left the High Line at West 30th Street where there is another lift to get down and started my walk back to the hotel….22 blocks North!! But I was so exhausted that at one point I decided to hop on to a bus. Unfortunately this wasn’t as straight forward as it had been that morning as the driver made me fold the buggy down – which isn’t easy with a baby in one arm. I put the buggy under my seat but other people got on and sat in front of it making it really tricky to get too. As the bus got busier I decided to jump ship before it got so busy that I couldn’t move! It was a real struggle to get off but when I finally did, I was super grateful to be walking again!!

We had a much needed nap back at the hotel! That evening I met Mr DaisLikeThese after work and we headed to Bryant Park, which is a little square behind the Public Library, to have a quick after work drink. There was a little kiosk bar which was full of suits having a post work beer. We were the only ones with a baby in tow but by that point I didn’t care – I just wanted a nice glass of wine!

For dinner, we headed to a little restaurant across the road from our hotel called Fig and Olive . I was convinced that it looked a bit too formal and wasn’t going to be very baby and pram friendly but I couldn’t have been more wrong! They gave us a table downstairs at the end of a row so that we could have the pram next to us. We decided to go for a few sharing dishes and a glass of wine each and it was really lovely.

We strolled across to the hotel and had an early night, in anticipation of our planned ‘night out’ in Brooklyn the following day.

Seeing as I had basically ticked of pretty much everything on my sightseeing list and because we were due to be going over to Brooklyn that evening, I decided to chill out a bit and rest my feet. I stayed fairly locally only walking to Times Square and popping out to grab lunch.

Lunch was courtesy of Smiler’s Deli (532 Madison Ave) which was a short walk from the hotel and it was simply amazing! I had a hot Korean beef hero (roll) but as I was queueing, I was salivating over the hot and cold salad bar. I just wish my trip was longer so I could head back here!

That night we were heading over to where my uncle lives in Brooklyn. We all met in the hotel bar and jumped in a taxi to the East River Ferry port. We jumped on a ferry heading over to the Williamsburg stop. The views were simply amazing!

I’d set my uncle the task of finding a baby friendly bar or restaurant with a view and he came up trumps with the Wythe Hotel in Brooklyn. It has a roof top bar with superb views back across the East River towards Manhattan and apart from having to check the buggy into a cloakroom and having to queue for a bit (it was obviously popular!), it was perfect for an early evening drink with a baby. When I was checking the buggy in, I noticed another buggy already there and the cloakroom attendant said they have around three or four families visiting a day, which made me relax a little! I put Baby DaisLikeThese on to the front carrier and we headed on up.

We had a great table and Baby DaisLikeThese fell soundly asleep, obviously not bothered by the noise of the bustling bar. I supped a glass of prosecco over her head and admired the view.

After our drink we took a walk to find somewhere to eat and came across a Thai restaurant, QI Thai, which looked perfect. Baby DaisLikeThese stayed asleep in the front carrier the whole time, which despite being slightly uncomfortable for me, made the meal that much more relaxing! The food here was amazing. We each had a starter and a main, I had a glass of wine and the boys had a pitcher of beer and the whole meal came to only about $15 dollars more than we had just spent on three drinks at the rooftop bar!

After dinner I left the boys to it, there’s only so far you can push it with a baby on a ‘night out’! I jumped in a taxi back over to Manhattan which cost about $30 including tip – so not too bad at all.

I was ready for bed but seeing as she’d been asleep all evening, this one was full of beans! Despite the following day set to be our last day in New York, I was excited. We had a late flight and I would finally get to spend a day sightseeing with Mr DaisLikeThese. I would also be getting to see the boys soon too!

Check back for the final part of Our Adventures in New York City.