Warning: Parameter 2 to wp_hide_post_Public::query_posts_join() expected to be a reference, value given in /home/customer/www/daislikethese.com/public_html/wp-includes/class-wp-hook.php on line 308
 Our Adventures in New York City - Part One. - Dais Like These 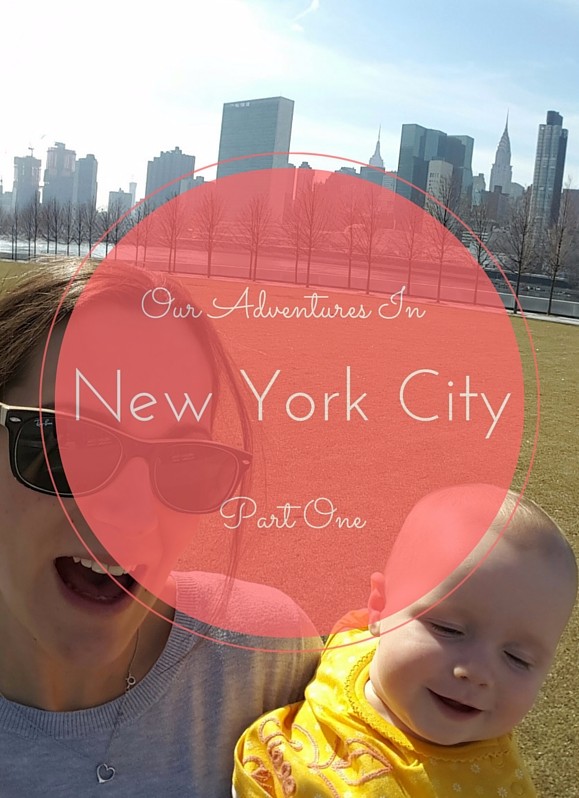 The opportunity recently arose for Baby DaisLikeThese and I to travel to New York. It was all very last-minute and exciting. Mr DaisLikeThese had a work trip there booked in the diary for months, but we realised a few weeks before he went that his airmiles had clocked up nicely and there was enough there for us to join him. As you can imagine, this meant an awful lot of rushing around and panic planning!

Unfortunately for my boys (aged five and eight), it was too much of a logistical nightmare to take them too (as well as school probably not being best pleased!) so they were to stay at home with their lovely grandmas tag-teaming their care.

Mr DaisLikeThese was going for a week but, considering I’d never been away from the boys for more than two nights before, I decided to go for slightly less. This meant travelling on my own with our six month old baby!

The Passport
I realised quite quickly that if this trip was going to happen, I needed to quite urgently sort out a passport for Baby DaisLikeThese. This involved a last-minute trip to the passport office in London. Despite panicking and stressing about it (I worry about everything), it actually turned out to be really straight forward. I went with our form and photos on a Friday, I was there for a total of about 15 minutes, and the passport was delivered the following Wednesday. Result! Packing
I am notoriously a terrible packer. I always pack far too much, but always forget the most important things. This didn’t bode well for a solo eight-hour flight!
To make things a little easier for myself for the journey out there, I packed all of my things in hubby’s suitcase and that all went off with him a few days earlier. This meant that I only had to concentrate on packing for a baby…hmmmm, ‘only’ packing for a baby!
I created a massive list of everything that we needed and tried to stick to it. As well as clothes (many many changes of clothes for all those possible nappy accidents, bottle spillages or food messes that I had visions of and not to mention the various different weather scenarios), I also needed to think about nappies, bottles, formula milk, food, cutlery, snacks and sterilising.
I’m not quite sure how I did it, but I managed to get all of the above (plus my toiletries) into a small wheelie suitcase and the changing bag. I had to – I physically couldn’t have got across the airport with anything more.

The buggy dilemma
We use a Bugaboo Cameleon 3 which, despite being an amazing buggy, doesn’t fold down very well. In fact it can only fold down in two separate pieces, and two quite large pieces at that! I was torn as to whether to take it with us or not. How would it cope in the hold of the plane, would it fit in the back of a New York taxi or on a bus or on the subway?
I do have an umbrella folding pushchair which Baby DaisLikeThese was probably big enough to fit into, and would probably be much more practical for travelling.
But I decided that with my plan to walk everywhere when I was in New York, I would need a buggy that was easy to maneuver and that I knew baby would be comfortable in (I also thought “we’ve paid enough money for this thing, I want to use it!”). So I decided to take the Bugaboo!
I had heard many a story of Bugaboo frames getting damaged on flights, or the two parts getting separated so I knew I needed some kind of carry case. A friend very kindly lent me the official Bugaboo travel bag but despite it being sturdy and sure to protect the frame, it was just too big for me to take whilst travelling alone. So, I found this travel bag on Amazon and the reviews mentioned that it would fit a Bugaboo Cameleon so I decided to give it ago.

The Airport and Security
So the day finally came! We were booked on to a 1pm flight and we only live about 20 minutes from the airport so I was able to get up and take the boys to school as usual which I was really pleased about.
With plenty of time to factor in traffic (there’s my worrying again!) we got a taxi to the airport. We arrived and went straight to the bag drop check in. We were flying British Airways and the check-in attendant was super helpful and told me I had a seat on the bulkhead row of four in the middle of the plane, and that at that time there were no other bookings for that row, we had it all to ourselves – this seriously put my mind at rest!

I had been really worried about going through security; not only was it going to be a nightmare getting everything onto the belt, folding the buggy, etc with baby in tow, I was also so unclear about what I was allowed to take in terms of baby milk and water. Everything I read online said something different. So, I decided to just take empty bottles and hope that I would be able to buy ready-made formula milk in the Boots on the other side of the security.
Thankfully I had a really helpful security guy. He made silly faces at Baby DaisLikeThese while I loaded the changing bag, jackets and my shoes on to the belt, separating my iPad and all the pouches of baby food and water. He gave the buggy a quick check over and didn’t make me take it apart. We walked through the metal detecting archway and we were all done. I was so surprised (and relieved!) at how easy it was.
There was a mum and baby going through just before me and I could see that she had stacks of cartons of Aptamil which security seemed to have no problem with at all. I was cursing myself for not just bringing our bottles of pre-made Hipp Organic too, but thankfully there was a Boots straight after security and they sold the exact one I needed.

We then stopped for a coffee and to give Baby DaisLikeThese her lunch before heading to the boarding gate.
So far so good!!

The Flight
As you can imagine, I was a tad nervous about how this was going to pan out. An eight-hour flight, on my own with a six month old baby. There was so much that could go wrong! But basically I lucked out, big time:

The announcement came calling those with children to come forwards to board; I was the only person travelling with a child so I had all the boarding staff at my disposal. A lovely lady held baby while I put the Bugaboo in the travel bag that I had bought. I managed to get it in perfectly (removing one big wheel – as I had read in one of the online reviews), and it was whisked away by one of the baggage guys.

When on board, we had a bulkhead seat which had a large fold down surface in front which would fit a bassinet or baby bouncer type seat. I was in an aisle seat and the two seats next to me were empty (there was obviously a last-minute taker for that final seat on our row).
The steward and stewardesses were super helpful in getting us settled; they put my bag up for me and let me know where the nearest loo with baby changing was.

I could see other passengers looking very worried to be sitting near a baby…I shared their worry!! But it was completely unfounded – Baby DaisLikeThese was an absolute dream from start to finish of the flight. And when I say dream, I really mean it. She did not cry once. Not once!! In fact she slept for a few hours after take off, woke up and charmed the pants off of anyone nearby – smiling, bouncing and babbling away. She sat in the little chair they gave us for a bit and then went to sleep again. I gave her a bottle and some food, both of which she did really well with.

The only thing that I did find hard was the nappy changes. I was treated to about four poos (four!!) and the tiny plane toilet was challenging to say the least. But hey, we managed.

The staff was amazing throughout; offering to get my bag down, warming the bottle, whispering to me when baby was asleep. I even overheard them discussing how amazing baby was, and that they had never had such a good baby on a flight before. This made me love them even more.

When we touched down at JFK airport New York, our Bugaboo was waiting at the door of the plane already out of the travel bag and assembled by some very speedy and super helpful ground staff. We headed for passport control and were invited into the priority queue which was much shorter, we breezed straight through to baggage and (now this has never happend to me before) I could see my bag right in front of me straight away, I grabbed it and headed out to the taxi rank!!

The Taxi to Manhattan I was super excited to be getting into a yellow NYC taxi. Despite my fears, the Bugaboo fitted fine into the boot of one of the larger vehicles along with my luggage.
I had done a bit of research and discovered that there is a fixed fare from JFK airport into Manhattan. This took a bit of stress out of the situation for me. I had some cash with me but the taxis also accept contactless card payment.
Babies don’t need a car seat in a taxi in New York, and so Baby DaisLikeThese sat on my lap. She drifted off to sleep again and despite it being rush hour, the journey to our hotel in Manhattan was pretty straightforward.
Mr DaisLikeThese was just arriving back from work when we pulled up at the hotel and was on hand to help me with sleeping beauty and all our stuff.

WE WERE IN NEW YORK CITY!!

I didn’t want to bore anyone with one long post so check out part 2 here.